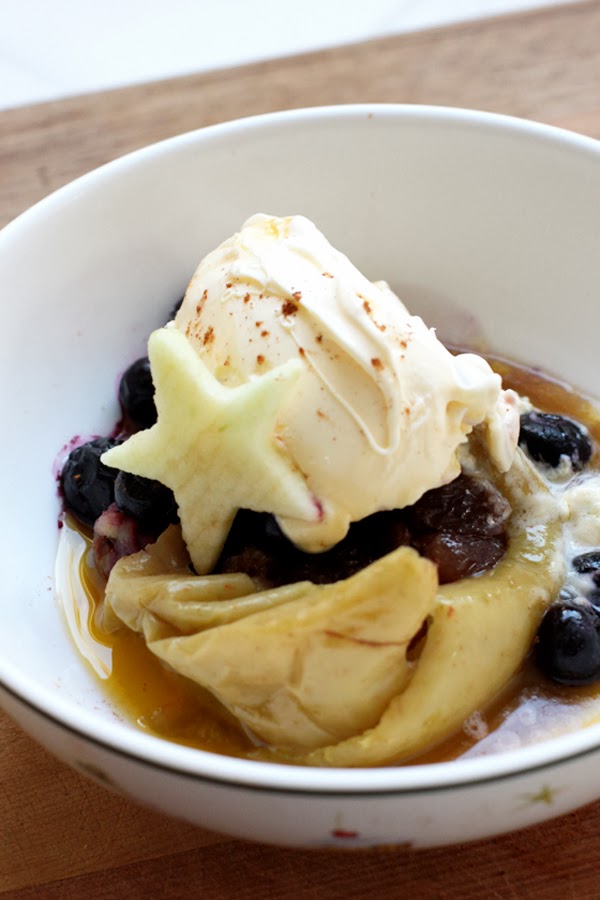 Well I thought I’d do something a bit different again today. I mentioned earlier in the week that I felt like starting a few more lifestyle related posts and recipes. I love cooking and although I don’t have the greatest experience, I love trying new things and collecting recipe ideas. I’m not planning to do a lot of these posts, maybe once a fortnight at most – and I always hope to share food I think you’ll be interested in too – yummy snack ideas, fast dinners, healthy desserts.
Simple BBQ/Campfire Baked Apples
(Or in the Oven)
I forget how much I love baked apples and can go without having them for ages (I think this is the first time I made them in about 2 years!). I generally prefer more of a simple baked apple. I add minimal ingredients to initially fill them with (usually just dried fruit, maybe some nuts and spices) then add sweetener, butter, berries and anything else I like at the end. I find that the apples have just as much flavour as when everything is cooked all at once, but they taste much fresher. Also this means that everyone can tweak just how much sugar or butter they’d like too.
This is the first time I’ve tried cooking apples in the BBQ. We had a family dinner over the weekend, and, as we have so much fruit at the moment, we thought we could try baking a few in the fire. The result was really yummy, every bit as good as oven baked ones with the extra specialness of being cooked over an open flame. 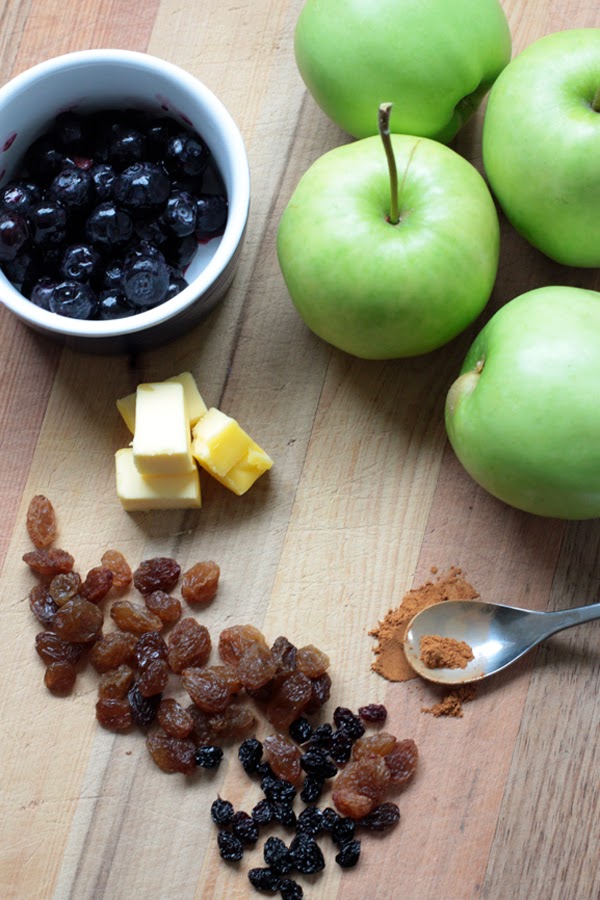 Ingredients:
To Start:
Medium- Large Sized Apples
2 Tablespoons of Dried Fruit per apple (I chose sultanas and currants)
You could also add – Chopped nuts, spices (cinnamon, cloves, nutmeg, ginger, mixed spice, vanilla), citrus peel, cooked grains, sugar, orange juice (in the baking tray)
To Finish:
Cinnamon
Blueberries (Fresh or Thawed)
Unsalted Butter
Maple Syrup
Double Cream
You could also add – any berries, fresh apple slices, yogurt, custard, cream cheese, lemon juice, honey.
Method:
Core the apples and fill them with the dried fruit.
If you’re putting them in the BBQ you’ll need to wrap them first, in a layer on baking paper (you could dampen this too but it worked fine for me without doing so) and then in at least 2 layers of foil. Cook apples in the fire for 15-25mins. This will depend on the heat and strength of your particular fire so keep an eye on them. I cooked mine for 20min on hot coals next to the fire.
If you’re putting them in the oven, place apples in baking dish and cover with a lid (or foil, or don’t worry about it). You can add some liquid to the bottom of the dish too to prevent the apples from drying out too much (like water or orange juice), but this isn’t necessary. Bake for 35mins at 350oF (180oC), then remove lid add cook for another 15mins. I’ve seen recipes cook for quite a bit longer than this and also quite a bit less than this – so see what works best for you.
Place apples in serving bowls, add butter to them while they are still hot (I put about 1tsp on mine) then finish with berries, a dollop of cream, a drizzle of maple syrup and a sprinkling of cinnamon (or whatever else you like). 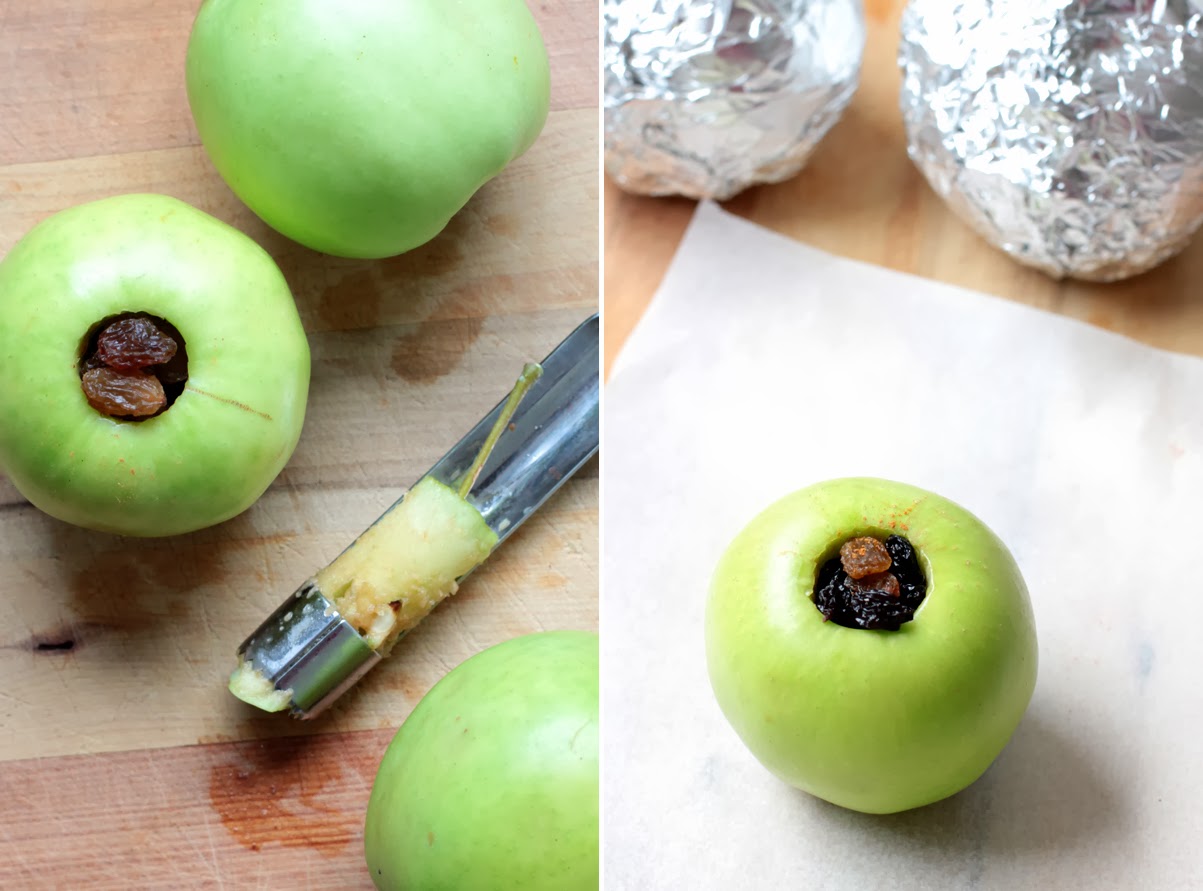 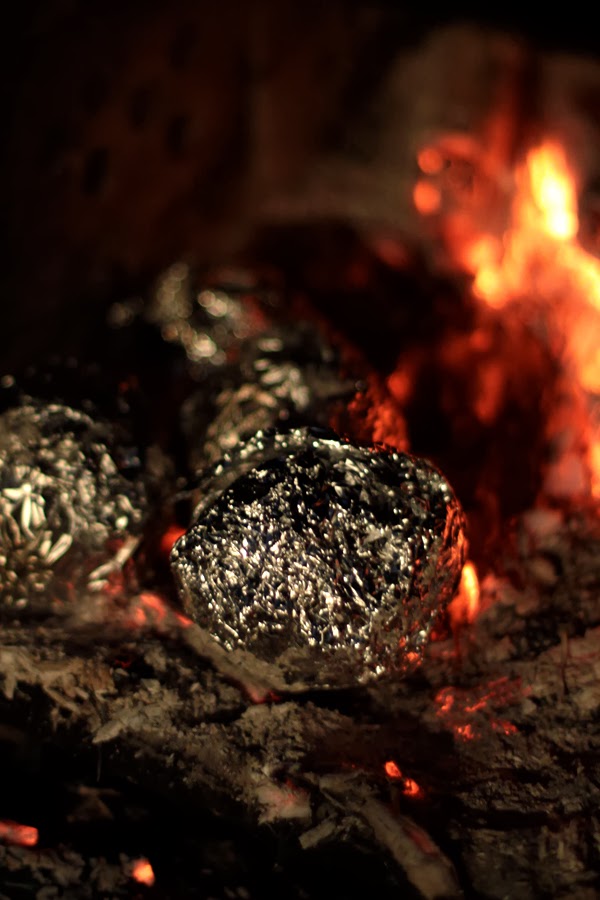 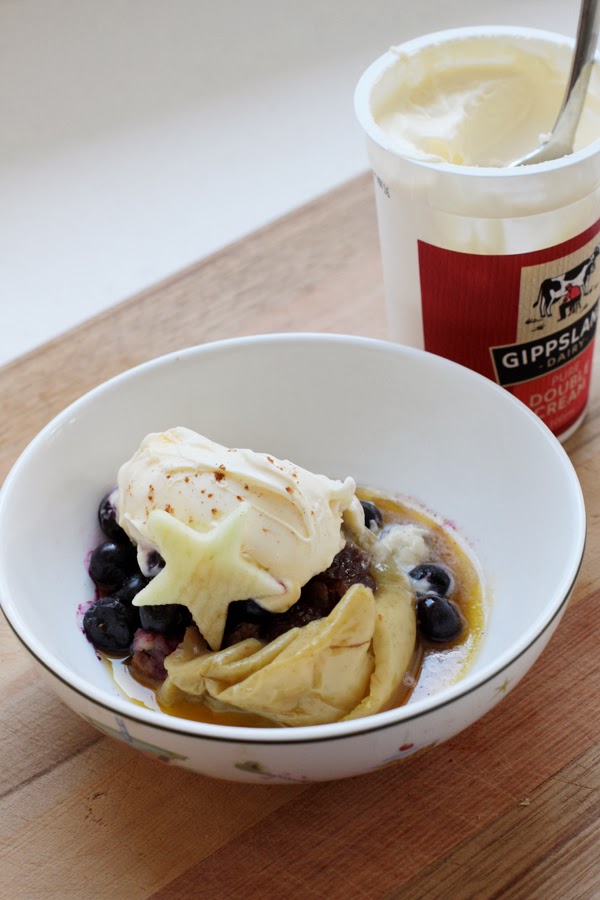 I cutout a little apple slice star with a biscuit cutter to make it look pretty for the photo – I think it’s actually really nice to serve with a few fresh apple slices too :)
How do you like your baked apples? Have you ever tried cooking them on a fire? 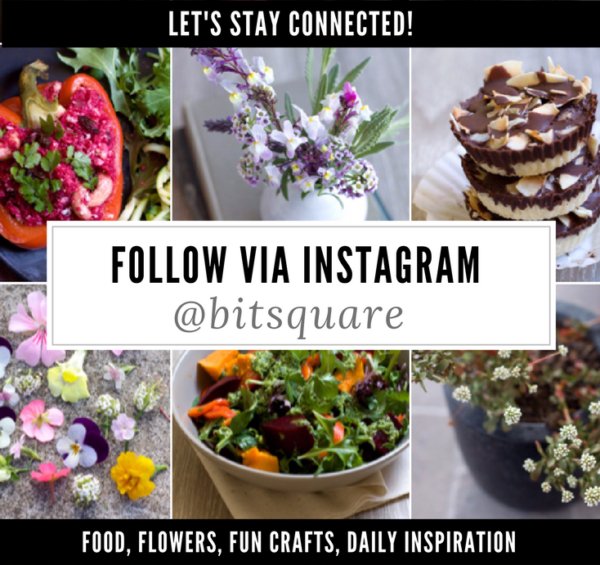